by Theresa Stephenson and Marissa Poisson

Today marks the 38th anniversary of Roe v. Wade, the decision by the Supreme Court of the United States that legalized abortion.  For Canada, January 28 will be the 23rd anniversary of a similar case, R. v. Morgentaler, in which our Supreme Court struck down the abortion law and left a legal vacuum. The Canadian case was brought by three abortionists, while the American suit was filed on behalf of a woman named Norma McCorvey, alias “Jane Roe.” Her view on abortion may surprise you:

Those two landmark cases in North American history have left a legacy of death and deception. Millions of babies have been killed in clinics and hospitals, and millions of post-abortive women have suffered the aftermath of their child’s death. When we sanction ending a preborn child’s life at any point during pregnancy, are Kermit Gosnell’s crimes not the logical extension of our society’s attitude?

Can two supposed bastions of human rights not do better in terms of respecting the most fundamental of them all? Just imagine how many of our classmates, friends and family members are not with us today because of abortion. It’s up to all of us to work towards making abortion a thing of the past. 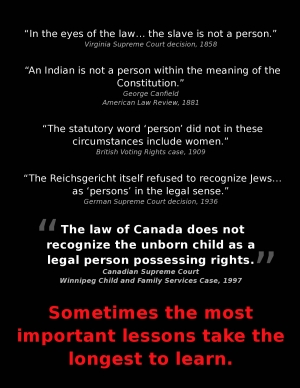